Disclaimer: I was provided an advance review copy of The World’s Strongest Librarian from Gotham Books. It has in no way influenced this review. 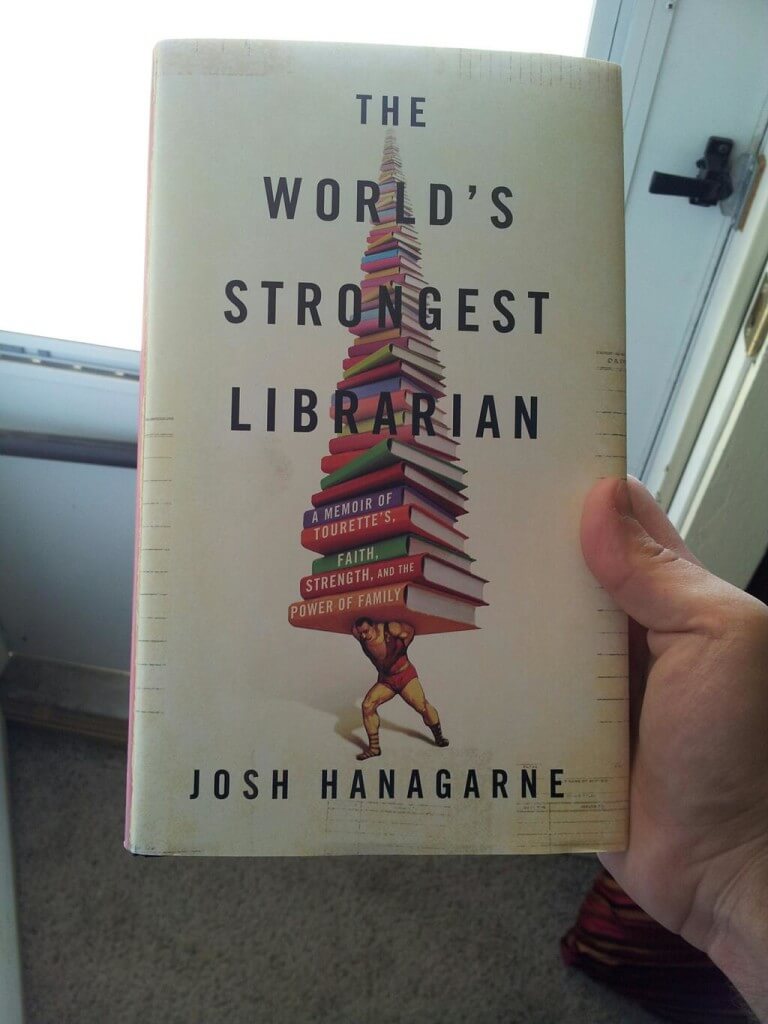 When I started blogging, I had no idea what I was doing. So I read lots of lists of must-follow bloggers. One name that was ubiquitous was Josh Hanagarne and his blog The World’s Strongest Librarian. After scrolling through a few posts, I was hooked. I subscribed to his newsletter and RSS feed, and as the updates came, I learned more and more how to blog from Josh.

I was even lucky enough to have a book review hosted on his site–The Lies of Locke Lamora for anyone who’s interested.

Since then, Josh and I have kept in periodic contact through Twitter and Facebook, and one day I logged into Google Talk, and he asked me how my book was going. My response was something along the lines of “great, but stressful. How’s yours?” and the conversation turned into him offering me a review copy. I accepted, and here we are.

Fast forward a few months, and I have a shiny new hardcover ARC all to myself.

A couple days later, I finish the book and wanted more. Much more. It was a phenomenal.

Now let me make this perfectly clear: I don’t like nonfiction. I don’t particularly care for memoirs. In fact, the only other memoir I can remember reading is Tina Fey’s Bossypants, and my wife even bought that and read it first. So when I say that The World’s Strongest Librarian is phenomenal, please understand what that means coming from me.

I don’t like nonfiction, and this may very well be the best book I’ve read this year.

For those of you who don’t know, Josh Hanagarne has Tourette Syndrome, grew up Mormon, and works in the Salt Lake City Public Library as a reference librarian.

Between stories of funny library happenings, we get insights into his family life and religious past, as well as his take on the cult of the kettlebell and strength training in general. The book is s funny and well-written, simple and easy-to-read.

And I’m probably biased. On a number of counts.

Josh recounts his childhood of dealing with Tourette’s, going to chuch and how the LDS church is different from–and the same as–most other churches. He talks about being bookish and loving to read, never really going anywhere without his books and how he fell in love with them, and how they provided him solace when his Tourette’s and other kids were unrelentingly terrible.

And as soon as I started reading, I could relate.

Like Josh, I was the book-loving Mormon kid who people made fun of and found solace in his books. Only I didn’t have Tourette’s–I was just fat. So from the very beginning, I felt like I had a connection with the author. I understood his frustrations with church life and the demands placed on teenage boys to go on a mission. I knew what it was like to be the kid who ran out of books in his elementary school library and have teachers buy extras just so I could have something to read. I knew what it was like to nosedive into a book to ignore kids on the playground as they made fun of me.

And since my wife does programming and publicity at a fairly large public library, I looked over at her as I read and said, “Reading this is like having a conversation with you about your day at work.”

Everything Josh said, from his crises of faith to his morbid love-affair with Stephen King’s fiction, I understood. So I was invested in finding out what happened next for the guy. I didn’t just care about the story he was telling. Because of our overlapping backgrounds, I cared about him.

In the end, it’s refreshing to read a memoir of someone who is just a guy. I mean, most memoirs fall into a couple of categories: major celebrities and dysfunctional screwups. You either have to be crazy awesome to have people want to read your story or you have to just be so crazy people will be fascinated by it.

Luckily, Josh’s story doesn’t fall into that category. He’s just a guy who had some pretty tough stuff to do deal with, and he wrote a book about it. I like that. I like that a lot. There really needs to be a lot more books written by nice people about being nice people.

I’m posting this here because Josh is a lifter and utilizes fitness in a very unique way: he uses it to keep his Tourette’s at bay. He uses it to find solace. He’s found enlightenment in physical exertion and form, and I think all of us can respect that. He talks about bench pressing while listening to audiobooks of Don Quixote and about how some guy at a kettlebell convention asked him at what point he realized that he’d sold his collector’s set of Mark Twain to pay for a three-day seminar that held as much content as a 10-minute YouTube video.

He talks about life and love and lifting and health and happiness like person, not like a celebrity. There’s no broscience or spiritual mumbo-jumbo. There’s Josh and his story. And that’s awesome.

It’s inspiring and honestly has made me more than a little interesting in picking up kettlebells myself.

In the book, Josh said his dad referred to the Mormon church as the Church of Don’t Be a Dick. And that’s a pretty good way to describe the whole outlook of the memoir, too. It’s 300 pages about how to have some really crappy things happen to you and not turn into a dick because of them.

If I can think of anything being worth reading, that is.

If you’re interested, you can buy The World’s Strongest Librarian at Amazon. Or you can check it out from your local library. I think there’d be something wonderfully tasteful about doing that.