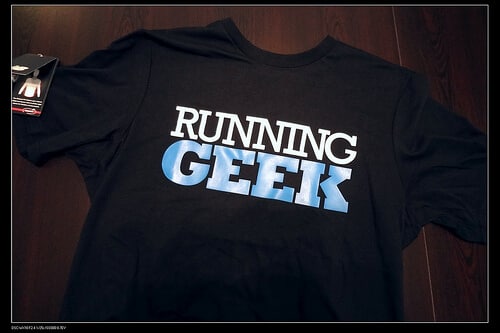 When I run, I need music. I’m nowhere near advanced enough in my running to let the sound of my footfalls hypnotize me. I can’t just fall into myself and run in silent bliss, letting my body tell me what I should be doing.

No, I need headphones and blaringly obnoxious pop and metal songs to motivate me to keep moving.

And like a good geek, I have some real treasures on my list that make me run faster and better–and also make me glad other people can’t hear anything through my earpieces.

Alan Silvestri did a magnificent job with the theme for The Avengers movie. There’s just something about the piece that makes you feel heroic and important when you hear it. As soon as the song comes on, I feel like a superhero–and I start to run faster. I puff my chest up and pretend like I’m Captain America.

“We Used To Be Friends” by The Dandy Warhols

If you don’t know this song, you should. As the theme for Veronica Mars, “We Used To Be Friends” will always hold a special place in my heart. Whenever it comes up on my playlist, I smile, think of Kristin Bell, and push myself just a little bit harder.

After all, you have to be in tip-top shape if you plan on solving mysteries around your home town, am I right?

Oh, Matt Damon. Of everything you’ve ever done, playing the skeezeball punk singer in Eurotrip will always be my favorite. With a singalong track on the DVD’s special features, I can’t count the hours at college parties my friends and I would wail into the night about how oblivious Scotty was–and just how awful Fiona was to him.

“This is Halloween” by Marilyn Manson

When Halloween rolled around last year, my wife and I put together a Spotify playlist of superhappyfuntime Halloween music. And on there, we put Marilyn Manson’s cover of “This is Halloween” from The Nightmare Before Christmas. As it turns out, it’s a pretty decent song to run to, and no matter what time of year it is, you should be paying homage to the Pumpkin King.

“Motherlover” by The Lonely Island

In my mind, no running playlist is complete without a few tracks by my boy JT. Sure, I have the obligatory “SexyBack” and even a semi-ironic “Bye Bye Bye” by *Nsync, but the best and geekiest Timberlake song I have on there? “Motherlover.” I mean, it’s easily the second best idea that I’ve ever had. 😉

What are your favorite geeky songs on your running playlists?