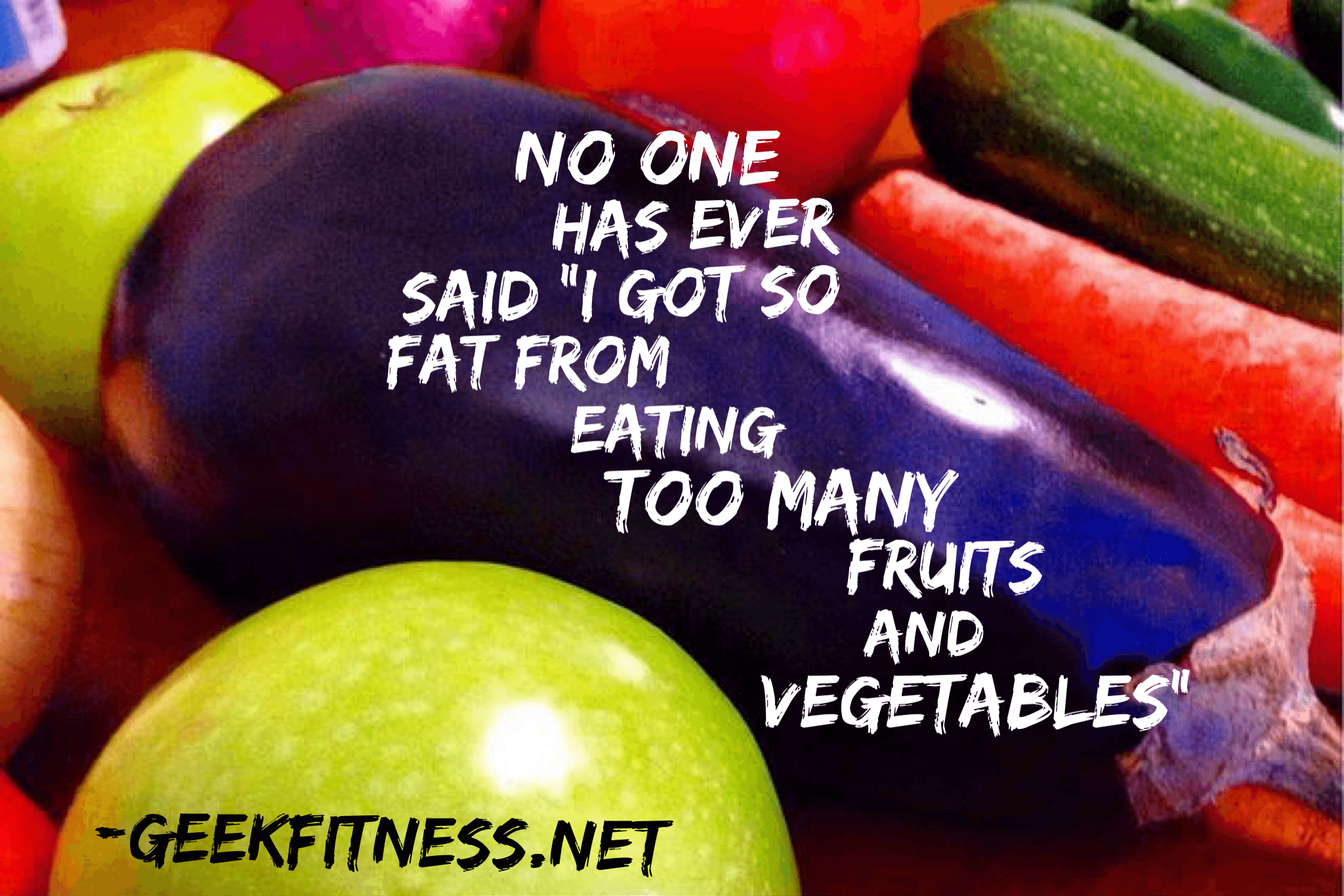 No one has ever said “I got so fat from eating too many fruits and vegetables.”

There’s a lot of people out there who consider overeating the worst thing you can do. Especially if you’re trying to lose weight.

I mean, there’s a good reason for it, and it’s not like gluttony hasn’t been vilified for centuries as one of the deadliest of sins.

But when you’re trying to lose weight, one of the main misconceptions is about overeating. Overeating isn’t the problem — overeating the wrong kinds of foods is.

Think about it this way: You have probably never heard anyone say “I got so fat from eating too many fruits and vegetables.”

Have you ever been at a party and someone just keeps stuffing their face with something? They would look at you, pop one last something in their mouth, and say, “Oh, man. I gotta stop before I eat all of these.”

You both laugh, and you reply, “Yeah, I know the feeling.”

Chances are what they were eating was candy or something like that. Something unhealthy. Something full of sugar and empty calories.

Most of us have an internal overeat-o-meter that tells us to stop even when we don’t want to.

The problem is that overeat-o-meter doesn’t just apply to sugary snacks. It applies to everything.

The idea of overeating is so vilified that people do it with pretty much anything they’re munching on. I’ve seen people do it with apple slices, grapes, and even baby carrots. I once had a cousin of mine put down a bag of baby carrots and literally say, “I have to stop before I eat this entire bag.”

To which my reply was, “Go right ahead and eat it all!”

Because even if you eat the entire bag of baby carrots (or whole bunch of grapes or the entire tray of apples or whatever), you’re still better off than eating a single cookie, slice of cake, or handful of potato chips.

When you look at junk food that most of us overeat, there’s a single unifying factor: they hold next to no nutritional value. They are incredibly calorie dense (in the forms of sugars, fats, and other carbohydrates) without very much in the way of vitamins, minerals, and other micronutrients that our bodies need to function and flourish.

Look at this image from YumYucky and tell me you’ll be ready to stop eating at 100 calories (the rough equivalent of running 1 mile):

Now, on the other side of this, we can eat 100 calories of fruits or vegetables and be way fuller because of all the extra fiber that makes up most of the meat of the plants. Thanks to FitSugar, you can see the difference in snacks side by side.

The reason for this major discrepancy in serving size is because of fiber and water. Unlike candies and baked goods that we tend to want to binge eat, fruits and vegetables are packed to the gills with fiber and water. They’re pretty much made of the stuff.

What that means for you is that inside each grape or bite of carrot, not only are you getting various minerals (which are not in junk food), the fiber and water in the plants are going to fill your tummy up way more, making it virtually impossible for you to overeat. Your stomach will get to the breaking point before you even come close to the same calorie intake as eating cookies or M&Ms or peanut butter cups.

Just keep in mind, we’re talking about fresh fruits and veggies. Not dried. And not juiced. When you dry fruits and veggies, you’re removing the two most important elements of the plant — fiber and water. You’re shrinking the size, so you won’t fill up as quickly, and so you’re able to ingest far more calorie than you would if it were fresh. You still get the vitamins and minerals and other good-for-you stuff, so dried fruits and vegetables are still a much better choice than processed candies and confections.

Also, keep in mind that pretty much all fruit and vegetables are still a major source of natural sugars.

For the most part, sugar isn’t too bad, it’s only when sugar is processed and added to your food to replace essential nutrients that it’s evil.

From a purely nutritional standpoint, your brain runs on sugar, and the amount you receive from eating your fill of fruits and veggies is never going to be enough to put you into a diabetic coma. I promise.

So the next time you’re snacking and you want to just binge eat until you are 100% ready to pop, make sure you’re doing it with fruits and veggies. The more you eat, the better.

I lost 155 pounds since 2010 by tracking carbs and cutting sugar out of my diet — but not once did I ever concern myself with eating too many apples or carrots.

Just remember, no one ever got fat from eating too many fruits and vegetables.

And hey, if you’re looking for a few different resources on how different foods, protein powders, and whatnot compare, the homepage over at Total Shape has a lot, as does Livestrong and PodiumRunner’s nutrition page.