Run While You Can 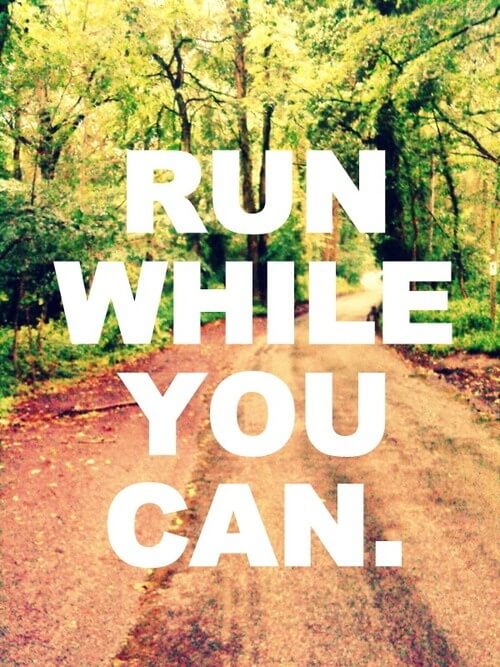 You know, that’s kind of how I feel today. Something always comes up. Either it’s too cold, you’re too busy, you didn’t eat a good dinner last night, you didn’t sleep well, whatever. Something comes up as an excuse for you not to run, so you don’t.

Not that you can’t. You don’t.

Let me tell you where don’t gets you: two years ago, I couldn’t run. I physically could not do it. I couldn’t go 15 seconds without thinking my heart was going to pop out of my chest, that my legs were going to fail, and that I was going to have an asthma attack. I couldn’t even jog for half of what C25K‘s first interval of the first day of the first week.

Well, today…I can. And I will.

If everything goes according to plan, my new treadmill will be delivered this afternoon. I’ll spend a couple hours after work putting it together, and then I’ll throw on some music or something off Netflix, and I’ll run.

Not because I have to.

But because I want to. Because I can. Because there is going to be some point in the future where I want to run, but I can’t. Because I’m sick or injured or just too old to keep it up. I will want to. But I will not physically be able to run.

But that’s not today. Today, I’m going to run while I can.