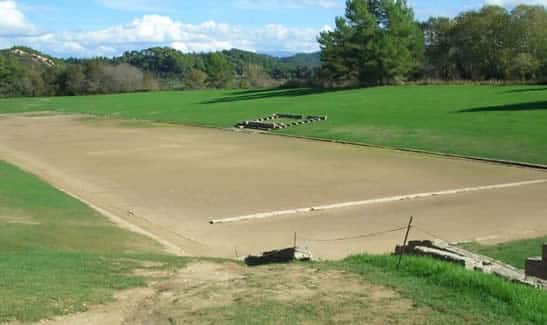 Recently, one of my colleagues came into my office and talked to me about his recent experience of doing his first 5K with his son. He loved doing it, and I loved hearing about it.

As we talked about running and racing, he told me that years ago, he had taken a trip to Greece and that one of the places they visited was the original Olympic stadium–which still includes the original running track.

I knew the stadium was still there, but I had no idea that the racetrack was still preserved. When he told me that, I was floored and so jealous he got to see it. (He’s a history professor, so obviously, he was, too.)

When he told me that his tour guide let them actually go for a run on the track, I’m pretty sure my jaw dropped and my tongue fell out like I was that old cartoon wolf. He just laughed and said, “It didn’t matter if I finished last. I got to run on that track.” (He then told me that he didn’t finish last, which is even more awesome!)

Right then and there I started my Running Bucket List with the first entry being “run on a 2,000-year-old Olympic track.”

Because…well…it’s a 2,000-year-old track from the first Olympic games. As a runner, does it get more awesome than that? No. No, I don’t think it does.

Except when you consider that the freaking marathon itself originated in Greece and there’s an annual race along that same course! #geekyrunnersquee

I think the second entry on the list will be to run the Athens Marathon (which is the one that runs that road, beeteedubs). After the way Haruki Murakami talks about running that course in What I Talk About When I Talk About Running, the idea of running in Greece seemed very spiritual to me, anyway.

And now that Bill told me about being able to run on the Olympia racetrack…I’m sold. A lot of runners have their wishlists of races they want to run by the time they retire from the sport.

I had never really thought about that until recently. I’m a runner, not necessarily a racer. I just love the experience of running. Which is why I think starting my Running Bucket List with a Greece twofer is a good way to go.

Who knows if I’ll ever make it, but I’m sure going to try.

What race or location tops your Running Bucket List?