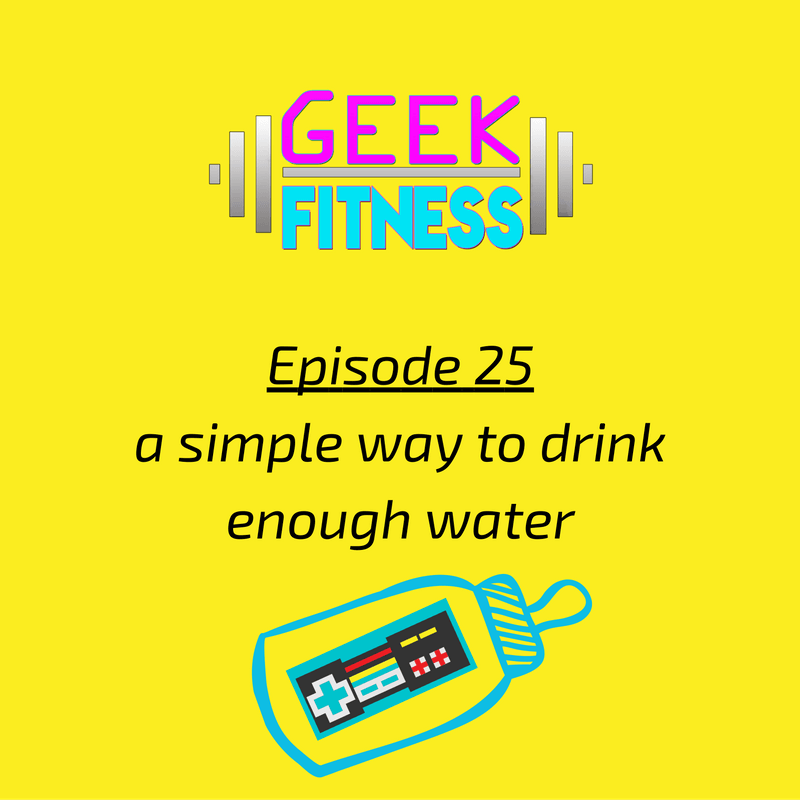 Press play below to listen to the episode, or check it out here if you can’t see the download. Additionally, you can find GFHH on iTunes, Stitcher, and YouTube (or whatever your favorite podcasting service is!)

Most of us don’t drink enough water.

One of the questions I hear the most from people is “how much water should I drink?”, and even when I tell them how much I drink (between 50 and 70 ounces a day when I’m running and probably 40ish a day when I’m not), the inevitable followup is “how do you keep up with how much water you drink?”

Luckily, my buddy Chris (@chrisevans17 on Twitter) came up with a really brilliant and simple way to drink enough water. All you’ve gotta do is put a new rubber bands around your water bottle every time you refill it, and you can magically see how much water you’ve drunk during the day. It’s awesome, and it’s simple.

Much simpler than keeping a virtual flower alive, amirite?

I realize that it’s probably stupid that I don’t track how much water I’m drinking. I never have. Which means I probably don’t drink enough water. You would think that after I gave myself kidney stones from not drinking enough when I was on phentermine, I’d have learned my lesson. Apparently not.

I mean, today I went out and did my 17th run in a row, and it was hard. I only went a single mile, and I ran every step. It was hard to get out the door. Part of the reason that I think it went so poorly is because I haven’t drinking enough water. Today, for example, all I’ve had to drink between 6am and 2pm is a cup of coffee. That is to say, I did not drink enough water today. By a long shot.

So how much water should I drink?

Is “more than me” a good answer? No. Well, if you’re really looking for how much water per day you need to drink, I don’t think you can go wrong with 6-8 glasses/bottles. Just drink when you’re thirsty. I keep a filter bottle around all the time and I never think “how much water should I drink?” because I always have a bottle beside me that I’m slurping from. I refill it anywhere I am when it’s empty.

Just keep in mind, if you’re concerned about how much water to drink, you need to heed the advice of my wife’s college band director: if your mouth is dry, you’re already starting to get dehyrdated.

I am gonna go see Doctor Strange tonight! Yay! I haven’t been as excited as I figured I would be about this one, but that’s okay. I am getting there now. I really like the character, so I can’t wait to talk about it on next week’s Geek to Geek podcast with Void. (Update: Doctor Strange was awesome, and you should totally see it. It’s one of my favorite MCU movies.)

If you’re not familiar with Doctor Strange, Rob from The Comic Box podcast did a wonderful primer for you to listen to before seeing the movie (or after, so you can learn about the comics!) How terribly sweet of him.

Until next time, fitgeeks, stay shiny!