If you know anything about me at this point, you know I love healthy food. I do my best to snack on fruits, veggies, and nuts, and I do my best avoid as much processed food as I can. When I do eat processed stuff, I make sure the ingredients are as simple and wholesome as possible.

A friend told me about Graze boxes a long time ago, but I never really gave it much consideration. I wasn’t looking for a snacking subscription service back then.

Now, though. Man, oh, man. Another friend gave me a code to try a free box, so I figured…why not?

After one bite of some kind of dried blueberry and yogurt concoction, I was hooked. Now, after two months worth of boxes, I feel confident enough in the product to recommend it to all you folks, too. You guys should definitely head over and use the code BJK4TWCWP to get your own free Graze nibble boxes.

What Time Is It? SNACK TIME!

It’s always snack time. Or at least it feels that way. I eat a lot.

I mean, usually, that’s an apple or a protein bar or grapes or some wasabi almonds or something like that, but there needs to be some variety. I eat like 2 snacks a day minimum, so there’s plenty of room for burnout.

Luckily, I have Graze now. It’s $6.99 per box, and each box contains 4 snacks. That’s about $1.75 a snack, which isn’t absurd. Given how much I eat, can I realistically pay that for each snack I eat during the day? Nope. Not at all.

But I have Graze nibble boxes delivered once every two weeks, which means I get to feel like I’m treating myself on 4 separate occasions. Keep in mind that you can set it anywhere between weekly to monthly deliveries, so you can find the frequency that works for you.

And if I decide that I want more of them, you can always just go in and order another one to be delivered.

Think Inside the Box 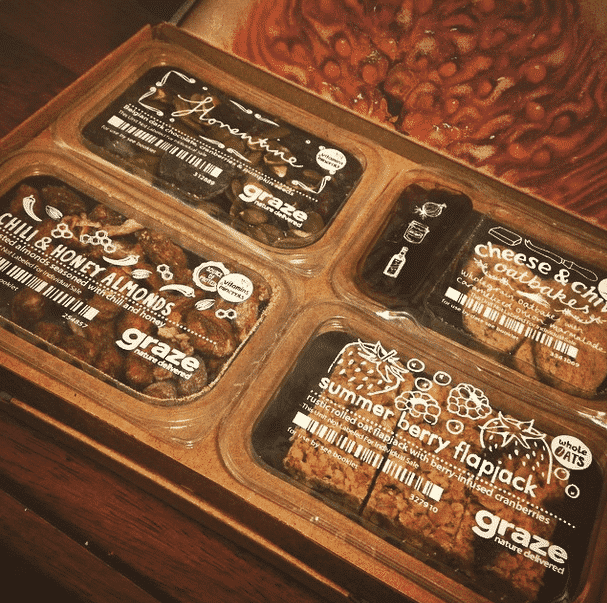 Like anything that sends you a random assortment of stuff, there are going to be hits and misses. I have had some snacks from Graze that I wanted to just keep eating and never stop (those blueberry yogurt goodies and some key lime raisins, for instance), and there have been some that I took one bite of and finished out of obligation because I had paid for it. (Apparently, I do not like dried coconut flakes. At all.)

With all that in mind, you can just go into your account and tell Graze how often you want to be sent certain kinds of snacks–even if that preference is never. (See above re: dried coconut flakes.)

The ingredients being used for Graze boxes aren’t anything special, but they’re whole and mostly decent. These are still prepackaged snack boxes, so there are going to be ingredients beyond just the food itself.

But not that many. I like that they don’t contain GMO foods or artificial colors and sweeteners, which are some my biggest issues. Instead of me rehashing it all, you can just go read their entire food/ingredient FAQ. 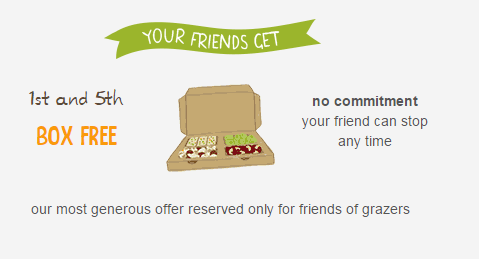 We all like free stuff. Let’s be honest with ourselves. My friend gave me his code and told me, “You get like the 1st box and maybe the 5th one free, and the more people you get to use your code, the more free boxes you get.” I thought about it for a second, and then I was like…”Sign me up!”

So yes, I do get something for referring you to Graze. When you sign up for a free box, I get free nomnoms, too! It’s awesome!

And since you get the free first one regardless, you can cancel as soon as that sucker ships if you want to, never pay a dime, and we both get free boxes of awesome.