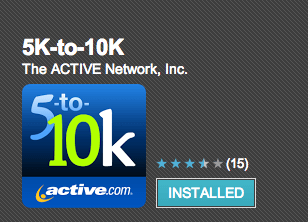 So I’ve decided to kick my running training up a notch. Instead of doing what I did last year–listening to my body and taking my time to get in shape–I’m going the geeky route to running a 10K in May.

I’m using an app on my phone to teach me to run. #geektastic

Now, I haven’t picked which specific 10K I want to run yet, but the important thing here, folks, is that I know what app I want to use!

After researching a few different plans and apps, I’m going with Active.com’s 5K-to-10K app, despite the issues I had with their Couch-to-5K program (it wasn’t tailored to someone who was running with asthma).

Now, I could do this on my own. I know that. I could very easily be ready for a 10K in May by running 3x-4x each week and adding 10% distance every week. And it wouldn’t be that bad, or that hard.

The main reason I want to use the 5K-to-10K app is that in addition to being a steady ramp-up in distance and time, the app also introduces tempo runs, fast runs, recovery weeks, and steady runs–none of which were included in my simple add-10% plan.

Like I said, I want to train like a real runner. Not a geek who fancies himself a runner.

Also, I hope that training with an app like this instead of by myself keeps me accountable. I’m really good at making myself feel terrible if I have a plan and don’t stick to it. So with the 5K-to-10K app, I have at least three workouts a week just staring me in the face. If I don’t run them, I am electronically shamed into doing better. (Kind of like me writing this post.)

I hope starting a simple plan like this will help ease me into the more rigorous plan I’ll use for my half-marathon training. If everything goes as planned, this entire week’s runs will be done with the 5K-to-10K plan as a base.

Once I’m through with Week 1, I’ll let you know how it goes.

Have you ever trained for a race using an app or training plan? What advice can you offer?