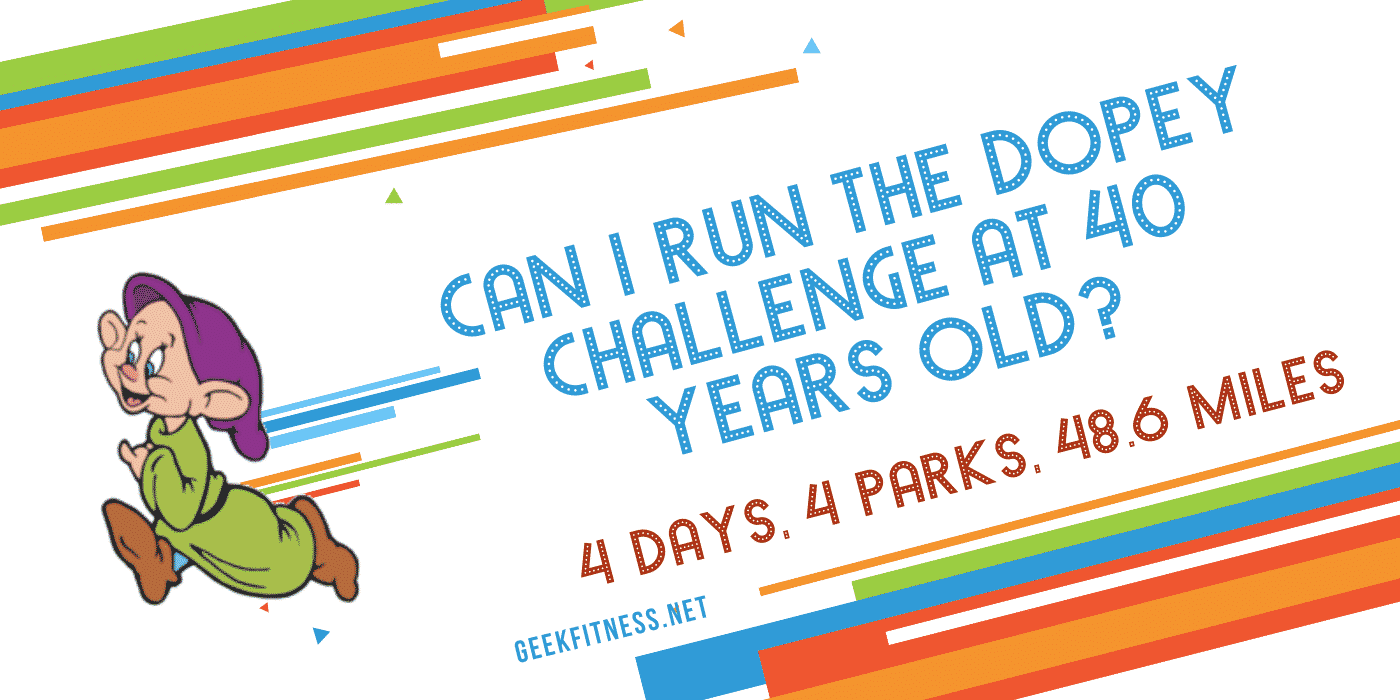 Can I Run the Dopey Challenge at 40 Years Old?

I turn 40 years old in January of 2023. If Disney keeps to its typical schedule, then 2023’s Walt Disney World Marathon should take place on my 40th birthday, with the 5k, 10k, and half-marathon across the preceding three days.

That’s 48.6 miles across 4 days and 4 Disney parks. It’s called the “Dopey Challenge” for a reason, right? And I have wanted to go full Dopey for the past 7 years, ever since I finished my very first half-marathon.

But here’s the problem: I am horribly out of shape and in no way, shape, or form ready to run a 5k or 10k, much less the Dopey Challenge.

I have a year to train

Thankfully, the race of my dreams isn’t coming anytime soon. I just turned 39 a little over a week ago, so I have plenty of time to get myself back into shape.

But, y’all, it’s hard. Since my mom died in mid-2018, I have been on a downward spiral. And my weight has been on an upward one:

Now, I realize that weight isn’t everything. It’s not even a gauge of fitness, really. But the increase has affected my fitness, and I can tell it’s harder to run now than it was.

Plus, my clothes don’t fit anymore. That’s the biggest thing. I went from a Medium in shirts to XXL again, and from 30 or 32 waist pants to 38ish. I don’t like that, and more than anything, that is why I need to get back into shape again.

And I just feel lethargic and bad most of the time, and that used to not be the case at all.

I had signed up for a marathon in mid-2019 and made pretty good progress toward being able to run it on March 1, 2020. I even did the “Half the Rocket City Marathon” (which is still the best name for a half, I’ve ever seen), and was by far the race I’ve felt (and performed) the worst during. But I did it.

Then early 2020 happened. I got real sick in January with an upper-respiratory infection, and that laid me out for weeks. Which meant I wasn’t able to run the marathon.

Immediately after, COVID lockdowns started…and well, you know the rest. Between quarantine, being sick, my wife’s dad being diagnosed with cancer, and just the ambient stress of living in an apocalyptic, plague-ridden, dystopian hellscape…I gained a bunch of weight.

My wife and I even talked about it, and the past 4 years have been full of trauma that we’ve been hit with constantly. And I don’t want that to be how this next chapter starts, with that horse shit as prologue. I want it behind me to move forward with the lessons I’ve learned, not as a base of where I start.

Now…with all that said…

Sign up for emails so you don’t miss out on any of the craziness that I’m getting myself into.

Are you looking to do the Dopey Challenge, too? Let me know why in the comments!