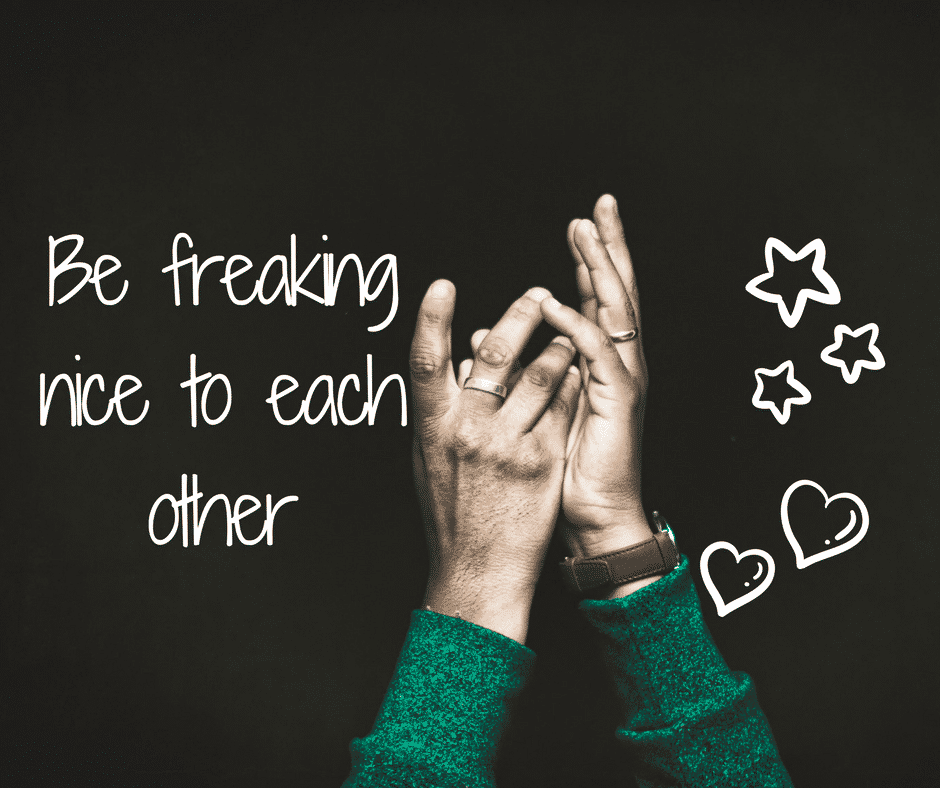 Be Freaking Nice to Each Other

I wanted to be a better person.

So I started changing it. Specifically with the help of my wife who, when my dad first asked me about her before our first date, I described as “she’s straight-up a better person than me.” Jennifer taught me that hallmark of being a better person was being freaking nice to people. The people I know, and more importantly, the people I don’t.

When I play an online game now, I wish the trolls a good day. I tell them “you’re having a harder day than I am, apparently, so I hope it gets better,” and then I disconnect. When I have a server at a restaurant or a cashier at the store, I ask them how they’re doing. And I listen to their response. I talk to them.

be freaking nice to each other

When we started the Geek to Geek podcast, our goal was to make an inclusive podcast that was not two dudes complaining about stuff we supposedly loved. We wanted a place where people come come (which led to our subreddit) and know that everyone that would–you guessed it–be freaking nice to each other.

The community here at Geek Fitness is phenomenal for that. It’s been inclusive and amazing and supportive to everyone. Comments have never devolved into bashing. I love that about you.

I know that things are gross outside. I know that you can’t turn on the TV without having negativity, bile, and vitriol. You can’t open up Facebook or Twitter without seeing internet arguments that solve nothing and only create strife between groups and individuals.

We have to show up. We have to be freaking nice to each other. We have to make sure that the people around us and the people who aren’t know that not everything is awful all the time. Things aren’t hopeless. In fact, things are quite the opposite. And it’s because of us. It’s because of you.

Personally, I have a single core ideal that directs how I live my life: don’t be a dick.

And you know what? Sometimes I fail at this. Sometimes, I am not a very nice person, still. Sometimes, I take things out on the people around me for no reason. But I apologize later. I do something nice for them. I try to make it better, and I try to show them that negative person isn’t who I am at my core. Not anymore.

being freaking nice is freaking hard

But, like anything else, if you practice it, you get better at it. I kind of think that people in general have a predilection toward the negative, toward complaining, and toward self-centered actions. I believe that’s a self-preservation mechanism. I don’t think that’s a bad thing, either. I just want you to know that if you want to be freaking nice to other people you can be, even if it’s not your default setting.

Like picking up heavy things and putting them back down, you can absolutely exercise your compassion. You can do HIIT training for kindness. You can gear up for gratitude the same way you do for a world boss raid. You can learn to be freaking nice to each other, if you’re willing to put in the effort.

And, like most everything else, the effort you put in is well worth it.

Resources you can use to be freaking nice to each other

One of my favorite tools is gratitude meditation. Don’t get me wrong, it’s super hard. It’s mega hard. But I think that if you meditate on gratitude, you can get a greater sense of where you fit into the greater whole of your community.

Additionally, compassion meditation is a wonderful tool. It helps me a great deal, though it seemed pretty hippy-dippy and hokey for a very long time. The more I’ve practiced it, however, I feel a great deal more connected to the people in my life–even those who I don’t get to see or interact with on a daily basis. You may see this called loving-kindness in some places, which just underscores the importance of the practice. If you can give this a real shot and put the effort in, I totally expect you to see a difference in your mindset and actions.

Surround yourself with good people. I don’t have a link for this one. But let me tell you how important this is. My cousin is a pastor and theologian, and he told me something that really stuck with me: “we are the sum of the 5 people we spend the most time with.” I think this is brilliant. And true. If you find yourself stressed and overwhelmed, look at the people you spend time with, online and off. Look at the podcasts you listen to, the movies you watch, the people you talk to on Facebook and Twitter, the folks you raid with in World of Warcraft, party with in Overwatch, and play D&D with on weekends.

We all become assimilated into the culture surrounding us to some extent, so it’s up to us to decide what culture we want to be a part of. Even if you didn’t like the movie Tomorrowland, the message is clear: surrounding ourselves with negative media and people becomes a self-fulfilling prophecy of hate, strife, and negativity.

It will take a ton of work to break that cycle. A ton. It’s a hard path and a lot of effort to walk it. But the first step is unbelievably easy:
be freaking nice to each other.