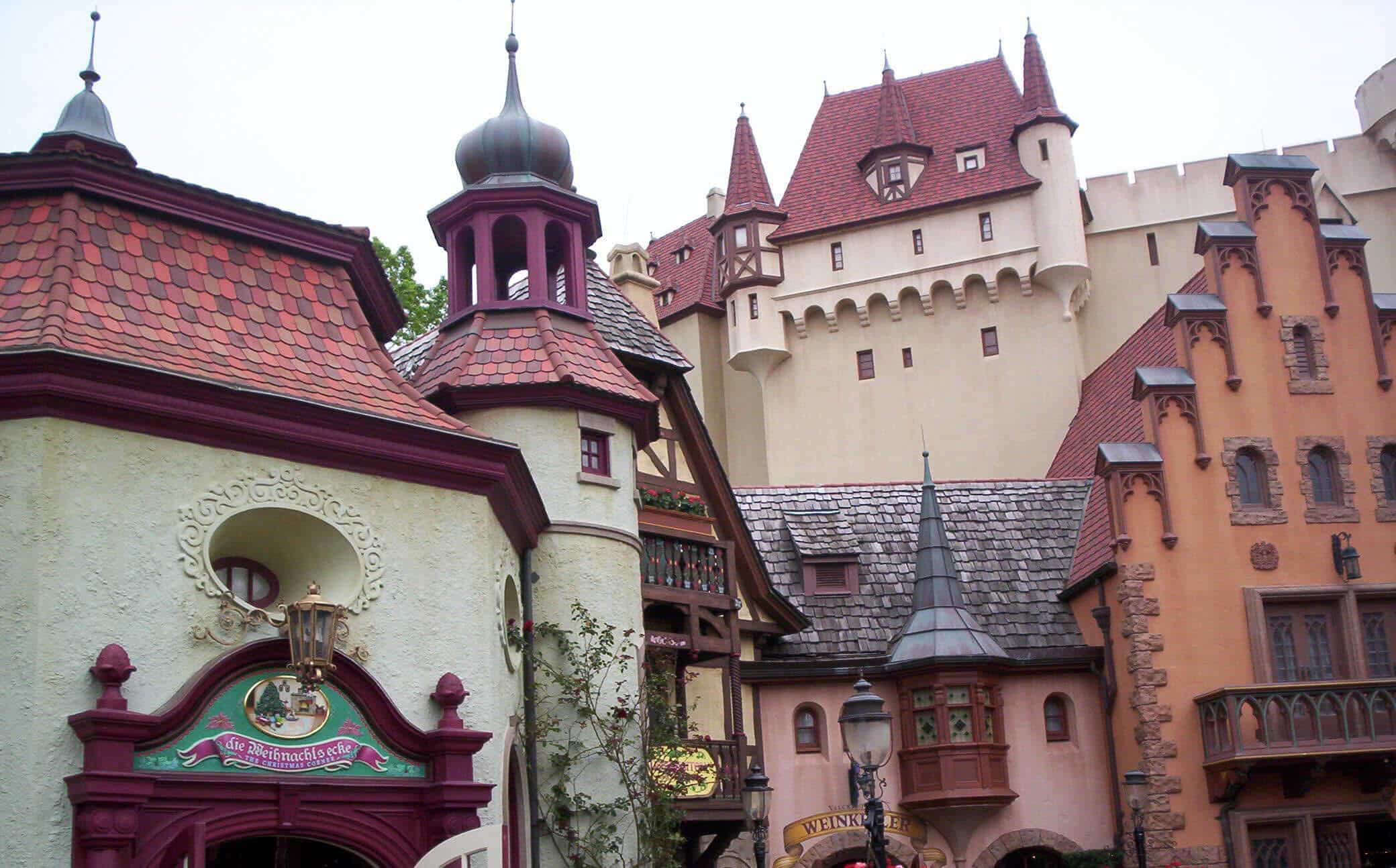 Running from Mexico to Germany with my Dad

In 2005, my family took a vacation to Disney World over spring break. We brought along my girlfriend, Bellatrix (name changed to a more appropriate one), and it was not a good idea. Everyone hated her. My friends at college all hated her, and both of my parents despised her. But because she was my girlfriend, my parents invited her along.

I tell you this because you should know that despite being in the most magical place on Earth, tensions were high on this trip.

So this story starts with all four of us arguing about something I have long forgotten while eating churros in Mexico. When Bellatrix was involved, pretty much every conversation turned into some kind of bickering fight.

Amazingly, my mom snapped pictures of my dad and me pretty much right before this fight broke out. So this is us, on March 15, 2005, sitting in Mexico at Epcot. I am truly amazed these exist, but I am so glad they do. (The featured image on this post is also Germany from that trip, but I have no idea if it’s the same building or not.)

My dad hated her, and he wanted to make his point, whatever it was. So he reached down to get something out of one of our bags of souvenirs…and the bags were gone. We searched around the table, and they were nowhere to be seen.

The last time we’d sat down was in Germany. That was 5 countries back! If we’d left it there, we were never going to find all our stuff. Someone would have taken it.

So my dad and I hopped to our feet, and we started walking.

“You guys stay here,” he told my mom and Bellatrix. “We’ll go search for it. Just see if you find it anywhere around here.”

Then, he looked at me and waggled his eyebrows. “Race ya.” He grinned.

“You’re on,” I said. We took off running. Keep in mind, I’m easily 280 pounds at this point in my life, maybe more. My dad weighed maybe 150. It was a few years after his first heart attack (and a few months before his second), but we stayed neck-and-neck for a while.

We were both running as hard as we could. People stared at us. We just keep looking back and forth between the throng of people in front of us and each other.

We grinned at each other. We passed through Norway, and I felt like a Viking.

I was pumping my arms as hard as I could. I was essentially leaping from foot to foot. (I had no idea there was such a thing as proper running form.) We were having so much fun.

Then I pulled ahead. I have no idea if my dad let me go ahead and win our race, but between having that heart attack and smoking a few packs a day, he was a tough old bird. He was truly one of the strongest, most resilient men I’ve ever met in my life. I was massively overweight and kind of a wimp. Between our respective handicaps, I like to think we were pretty evenly matched that day.

So as I pulled ahead, I thought I must look like Tom Cruise running away from an explosion. I looked back as my dad kept running, slowing down little by little. I ran all the way across China, through the outpost, and into Germany. When I reached the bench we had sat outside a gift shop, I essentially collapsed in simultaneous victory and defeat.

I had run 4 entire nations and won our footrace. Victory.

Our souvenir bags were absolutely nowhere to be seen. Defeat.

“Good job, son!” my dad called as he sauntered into view.

“It was!” he said. “You got our stuff?” He sat down beside me, huffing and puffing as much as I still was.

“I bet. Bellatrix, too. All her stuff was in there, too. Even my samurai book was in there! I really wanted that!” Earlier in the day, we’d been shopping in Epcot’s various areas, where I had bought myself a book called something like Way of the Samurai or something like that in Japan, and Bellatrix had bought herself some kind of hat made out of beads and chain in Morocco. My mom, like on pretty much every other vacation we’d ever taken, had loaded up already on chocolate and fudge and other delicious candy.

It was all gone.

“I had fun running over here, at least.”

“Do you think we ought to check in one of the shops around here?” I asked. “See if someone turned the stuff in since it was, like, abandoned?”

“Like someone didn’t just steal it?” my dad asked.

Dad came with me, and we went into the gift shop near us. We went up to the counter and told the clerk what had happened, how we got all the way to Mexico and realized that we’d left our bags behind.

“Oh yeah!” the woman said. “One of the cleaning crew brought it in. Hold on a second!” She turned around and started rummaging through the cabinets behind her. Then, like a moment out of a movie, she turned back around with our bundle of colorful, Disney-themed plastic bags that contained all our missing stuff. “One of the guys came in with them and said they were beside a bench out front. No one was around, so we just put them up in case you guys came back.”

I can only imagine what my face looked like. But I’m sure I was grinning from ear to ear. “That’s awesome!” I told her. “Thank you so much!”

“Yeah,” my dad said. “Thank you. We really appreciate it.”

“Absolutely!” the woman said. “I’m just glad we were able to find it and keep it safe for you. Is there anything else we can do for you?”

“Well, enjoy the rest of your trip and have a magical day!” she told us before going back to work.

“Wanna race back?” I asked as we started back toward Mexico.

“I think one’s good for me today. Besides,” he said, “I don’t want to show you up and beat your ass after you won the first one.”

I laughed. “Sure,” I said and patted him on the back.

Honestly, I was pretty glad he declined. I didn’t think I could sprint all the way back to Mexico from Germany, anyway. Especially with all the extra stuff we had to carry at that point.

I’m not sure if you remember, but one of my earliest memories also involves my dad and running.

I can’t help but notice the irony that most of my memories about vacation involve running in some aspect. I guess I just couldn’t take the hint until I was ready, huh?

You can read about my eventual official Disney running in my runDisney Star Wars weekend recaps for the 5k, 10k, and half-marathon. (I even stopped during the 5k to take some pictures of the route my dad and I took up above. Good times.)