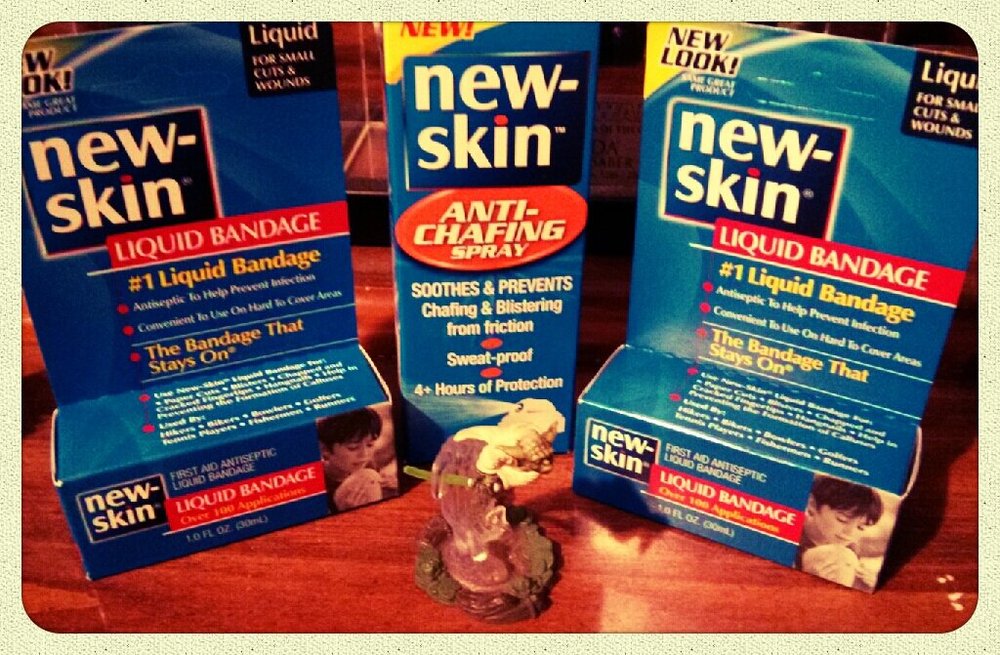 It’s been a month since I posted about being a part of #TeamNewSkin, and it’s time to get you guys and gals up to speed.

Like I said before, it really was serendipity that I was approached by New-Skin. Over the past month, I’ve hit a pretty good stride with my running and pushed past a few barriers–both mental and physical.

Since using the New-Skin Liquid Bandage on my big toes, I haven’t had a single blister on my feet. Not one. I’m not just saying that, either.

I spray the stuff on the sides of my toes before I put my socks on, and I’m good to go for miles and miles.

The only problem is that I have to wait for the Liquid Bandage to dry before lacing up, and that can take a few minutes. I’m a creature of habit, so for the first week or so, taking that extra time really messed with me. At this point, I’ve assimilated it into my pre-run routine.

Yeah, you read that right. I hashtagged bloody nipples, the bane of male runners worldwide. Last summer, I had a big problem with my nipples rubbing raw, bleeding, and scabbing over. If you’ve never experienced it, lucky you.

I thought I’d beaten it, though, by switching to UnderArmour seamless shirts (they’re so much softer than cotton and have less friction). But that wasn’t the case. I merely postponed the issue. I just wasn’t running enough to get them anymore.

Over this month, I’ve also started having issues with this again, as well as chafing along my hip bones from where my shorts rub me bloody.

Enter New-Skin Anti-Chafing Spray. This stuff is magic. Magic, I tell you.

I don’t know what it is or why it works, but I know that I slather myself with it before runs. Under the waistband of my shorts, coating my nipples, even along the balls of my feet so that my socks don’t rub. And the chafing is much better. I’m not saying it’s gone–because it isn’t–but it’s manageable.

I no longer want to die the moment I step into a post-run shower. Which means people who smell me won’t want to die. It’s win-win.

The third barrier I’ve pushed through has nothing to do with New-Skin, actually. But I’m proud of it.

Until recently, there was a mental block on my pushing past 3-5 miles a day. I knew I needed to, and my body was perfectly fine to do it, but I always stopped before I hit the 10k mark. My mind was so ingrained that 5K (3.1 miles) was a stopping point, that I naturally slowed at that distance and was ready to stop.

So I’m happy to say that I’ve now moved past this little self-imposed barrier. I recently did my first non-stop 8 mile run, and then got slammed with some kind of sickness that debilitated me for a week. I expect to be back to cranking out 8-9 miles a day next week, using this one as recovery to get my body back into running.

Keep on, keepin’ on

So far, I’m really pleased with being a part of #TeamNewSkin. I mean, I’m still dealing with chafing, but not blistering. And that’s just part of being a distance runner. My blistering issues were nearly debilitating before discovering the New-Skin products, and since that seems to be behind me, I’m pretty sure I’m good to go.

What do you guys use to prevent chafing and rashes on your longer runs?

According to a recent survey by New-Skin®, nearly one in five runner respondents said that they either often or occasionally experience minor injuries such blisters or chaffing when they run, jog, power-walk, etc. The New-Skin products have you covered whether you’re playing ball, hiking, or enjoying an afternoon in the garden.