What Do You Call a Runner Who Can’t Run? 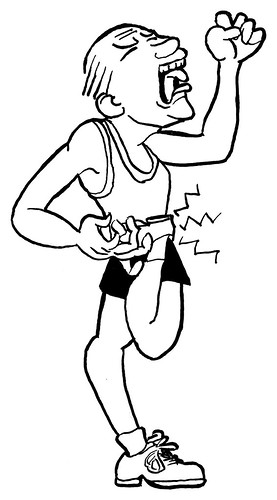 I found out today that I’m going to be pretty stationary for the next couple weeks. My doctor has me on a steroid regimen to treat what she thinks is bursitis. I was told not to run, not to cycle, not to do anything but the bare minimum regarding my hip until this is taken care of.

And after 10 days of not running, another 14 (at least!) is going to drive me crazy. I mean, sure, I want to heal, but I consider myself a runner more than anything else–even over being a writer. Being told not that I can’t run is a real knock and is making me do some serious self-evaluation.

Like I said before, I grew up thinking that I was special. I was always the smart guy, and I identified that way. It’s what made me special. Out of that identity came my job as an English teacher, and later blogger and novelist. I guess you can say that over the past few years, I started identifying as a writer above all else.

It hadn’t really clicked how much I identified myself with the term runner. Not athlete, not lifter, not superhappyfuntime weight-loss awesomeman…just runner.

To make matters even more OMG SERIOUSLY?, I signed up for my half-marathon on Sunday. So I have about 8 weeks to get myself able to run a good 13.1 miles, and I have at least two of those taken from me. #sadtrombonesequel

So where does that leave me now?

I’m a runner who can’t run. It’s my number one hobby. It’s my escape. It’s what I do for fun. It’s what I research in my spare time, and it’s what I’m writing about for Fitocracy and for this website (mainly).

Well, I get to do what I always talk to you folks about: I get to try new things.

I’ve been really getting into lifting lately. I am enjoying the StrongLifts 5×5 program a lot, and aside from being barred from squats, I can totally keep lifting and working my upper body. I’m totally bonding with my kettlebell lately–to the point where I’m tempted to name it. Twitter suggested Professor Kettlebelly. Any one beat that?

I might go kayaking with some friends this weekend. I can keep doing yoga to strengthen the joints so the bursitis doesn’t come back once the steroids are gone. I can do tons of circuits of calisthenics and pullups, chinups, and other kinds of movements that don’t involve my lower body.

In short, I’ll deal with it.

I’m a runner who can’t run. And that sucks a lot. A lot. But there’s nothing I can do about it. But just like how weight loss doesn’t equate to fitness, neither does running. I can do other things to maintain my health. I can eat right, and I can focus on what matters: staying fit and being happy.

Have you ever been sidelined due to an injury? What did you to do make things bearable?