Your Fitness Quest: The best sugar-free desserts for weight loss 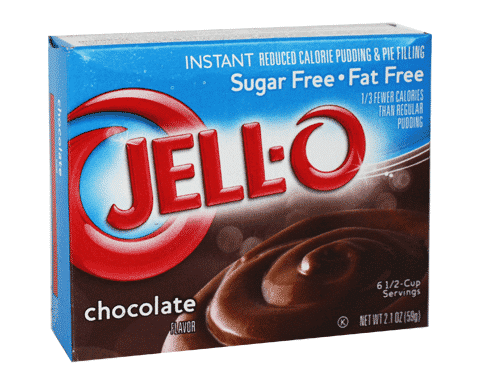 So you’ve been on your fitness quest for a couple weeks now. You have hopefully tried to wean yourselves off the simple carbs and ridiculous amount of sugar found in most American foods.

And, if you’re like my wife and me, you’re still hankering for something sweet after dinner or for afternoon snacktime.

Which goes back to my number one rule: don’t deprive yourself.

When we were doing low-glycemic pretty hardcore, we had dessert pretty much every night. We experimented a lot, but found a few staples that kept us going.

And, for the most part, weighed in around 100 calories a treat.

Despite being a tiny box of ultra-processed chemical powder, one of the main desserts we ate was instant pudding. It was cheap at the grocery store, took under 10 minutes to make, and we could eat the whole bowl between us and actually be satisfied.

Now, you do have to watch instant puddings and gelatins because the starches and such in them can add up. But a night or two a week never even phased us.

And it was delicious. And chocolate.

One of the most useful gifts we received when we got married was an ice cream maker that doesn’t require ice or salt. You just freeze the cylinder, pour in skim milk, add in whatever flavors you want, and 45 minutes later…#nomnomnom

We always added some Splenda to sweeten the concoction and a dash of bourbon-barrel vanilla, or–if we were feeling frisky–maybe some cocoa powder or bananas. All of it if we were living on the edge.

Warning: Do not add chocolate instant pudding to the mix and expect chocolate ice cream. It will not happen. You have been warned.

My wife hates fruit, but not me. So during my last stint as a World of Warcraft raider, I decided to make my raid nights a little healthier. Instead of Doritos and Code Red Mountain Dew, I spent my mid-raid break slicingup a bowl of strawberries and topping it with a metric ton of low-fat whipped cream.

And if time was an issue and I just had to get back to make Korfok the Unintelligible take a dirtnap, I subbed in blueberries instead of strawberries. You don’t have to slice them up or anything. Pour ’em in, spray on the cream, and nom your way to epics.

Yep, just peanut butter. Despite my wife arguing with me that it’s a sweet treat, whenever I really needed just a mouthful of nomliciousness, I just went to the cupboard and spooned myself a treat.

At the time, it was just some crunchy peanut butter we snagged at the store. These days, though, I’m going for the natural kind of peanut butter. It takes far less processed than the normal kind, and if you can find a Whole Foods (or similar kind of health/organic grocery) nearby, the price for freshly crushed peanut butter isn’t extravagant–even if everything else in the store is.

Seriously, I’m addicted to this stuff. It’s just nuts that came out of a grinder, but I eat it on a sandwich almost every day for lunch, and I spoon it into my mouth at night when I want a sweet.

Experiment! Be Creative! Explore Your Tastebuds!

We did pretty often. And some stuff we loved and some stuff we didn’t. But the main thing to remember is that we did not deprive ourselves. Snag yourself a low-glycemic cook book (or a diabetic desserts cookbook, because they’re cheaper and easier to find) and get to nomnomnoming on some chocolate–or whatever other kind of sweetness makes you crazy.

Do you have a particular kind of dessert that saves your sanity when you’re losing weight? Leave a comment about it! I’d love to try it!