In the Neal Stephenson novel REAMDE, there’s a writer/gamer who lost a ton of weight by being able to spend his work day on a treadmill desk. He was able to combine a healthy lifestyle without giving up any productivity.

That idea stuck with me, and since then, I’ve been in the market for a similar solution, what being a writer/gamer myself. Unfortunately, most treadmill desks are well over $1,000 and not suited to running as well as walking.

Then I ran across the FitDesk, a semi-recumbent exercise bike that has a tabletop attached. Depending on where you buy it online, it’s between $200 and $300 (you can even use the coupon code “FD30” at the FitDesk website for a $30 discount!), which is much better than the $1,000 that treadmill desks tend to go for.

So I snagged one, and since early November (right at two months as of this writing), I’ve been using the FitDesk 2.0 almost every day. I play World of Warcraft and Final Fantasy XIV on it, I watch Netflix and Hulu on it, and I write novels and blog on it (in fact, I’m pedaling away right this very second).

If there’s a single piece of exercise equipment I wish I could put in every home in America, it’d be something like the FitDesk.

The best thing about the FitDesk is that it’s super comfortable. The saddle is wide and soft, and so is the the backrest. They’re both fully adjustable in terms of height, and it’s super easy to do. My wife is 5’0″, and I’m 6’0″, and it takes all of 30-seconds to set and reset it between us. 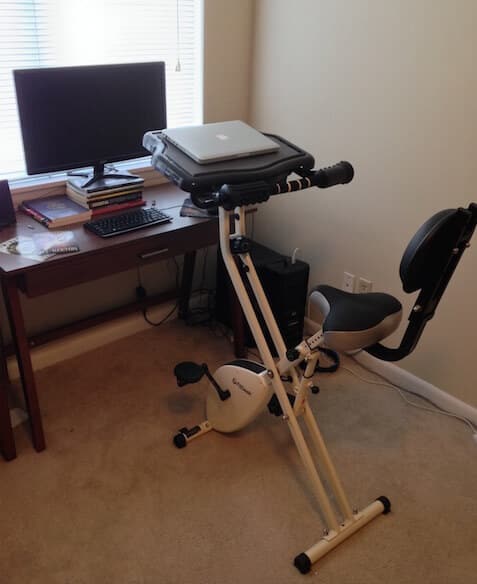 I don’t get saddlesore after riding this like I do my road bike on a trainer, and any discomfort in that area was gone in just a couple of days. I’ve spent periods of up to 5 hours on this thing with only bathroom breaks between it, and I was fine to go around and sit on hard surfaces after that. I cannot say the same thing with my Fixie on a trainer. I never got fully used to it.

There are 10 resistance settings (with 1 being so frictionless it’s uncomfortable and 10 really requiring a lot of effort to move). I keep it on 5, and I never think about it. I just pedal away while I work or game, and I tend to have a good sweat worked up by the time my sessions are over.

The tabletop (which is textured so your laptop or keyboard/mouse doesn’t slide) has a small desk drawer in it, and I keep my Star Wars: The Old Republic security key, some scratch paper, and some pens inside it. It’s not much bigger than that, but honestly, what all other kind of stuff do you need while getting stuff done on an exercise bike?

There are arm/wrist rests, and they’re soft and comfy. I don’t think about them much at all, which is about what you want from a feature like that.

It also folds up when you’re not using it, so you can tuck it in a corner. It weighs about 50 pounds, which is light for a piece of exercise equipment, but you may not be toting it around the house every day. I just leave mine set up in front of my desktop

As awesome as the FitDesk is, there’s one major problem with it, or at least with mine–the speedometer/odometer is garbage. Mine came with one that was perpetually stuck in kilometers instead of miles, and after an hour of use, I realized it was horribly calibrated (and I could find no way online to calibrate it). I know based on how much I’ve used other cycles and how hard I was going that I was not cycling at a constant 17mph rate. I wish I had been, but alas… 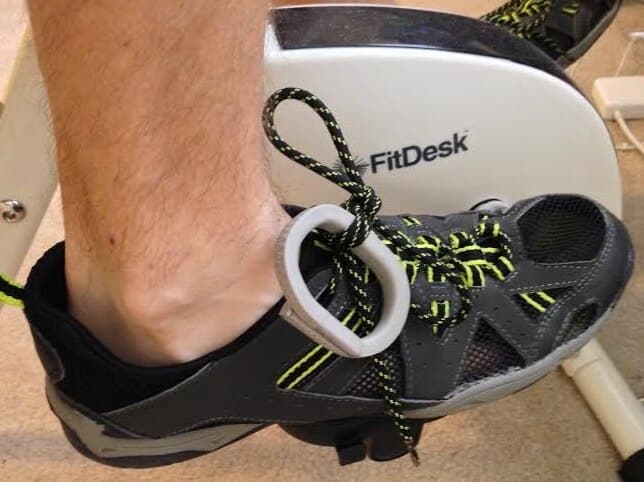 To combat this odometer issue, I simply tie my Jawbone UP to my shoelaces and pedal away. As luck would have it, it syncs up pretty well with my steps (in my testing 1 rotation was 1 step), and I’ve been able to keep up with my distance and do a decent bit of calorie/effort tracking that way. I know that’s not for everyone, but if you’ve got a fitness tracker like a Fitbit or a Jawbone, it’s an option.

(Though be aware, I have noticed my Jawbone not tracking movement if I’m not pedaling consistently. I have to keep myself moving at a regular pace with steady effort or it won’t track. I’m sure I’ve lost a bit of distance that way, but it happens. I know it’s not as exact as an odometer would be).

The only other real issue is that while it came with a resistance band for minor arm workouts while you’re riding, my band broke the very first day I had it. Since I wasn’t going to use it anyway (and resistance bands are super cheap), I don’t even consider that a con. I’m not going to be lifting weights, riding a bike, and writing a novel at the exact same time. But if that’s your thing, know the band wasn’t the highest quality.

The only real piece of ugliness with the FitDesk is that the tray is very narrow. It’s absolutely perfect for my 13-inch laptop (and probably would be for any size laptop up to 15 or 17-inches), but for a keyboard/mouse, it’s very small.

I ended up buying a $15 mini keyboard without a numpad to replace my Logitech G15, though nothing will make me do away with my Naga Razer Epic mouse. I figure that’s a decent price to pay for being able to exercise and play an MMO at the same time, you know? 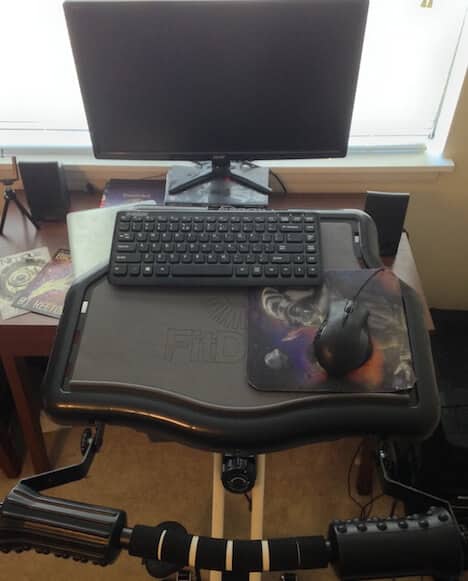 And I had read some reviews online that said it was a nightmare to put together. Mine wasn’t. I have a refurbished unit, so I don’t know if that changes my experience, but mine was pretty easy to put together. I’m kind of illiterate when it comes to making things and following assembly instructions, and I was able to get the FitDesk together in about 2 to 2.5 hours with minimal wailing, crying, and gnashing of teeth.

So…What’s the Verdict on the FitDesk?

Go buy a FitDesk. Right now. If you have the money and the space, I can’t recommend this enough. It’s small, light, and has stood up to 2 months of pretty solid torture without a mark on it (and remember, mine is refurbished, too!).

After I finished my half-marathon in October, my foot started hurting, and I think it’s a stress fracture. I’ve taken it light with running, and since my asthma doesn’t like the super-cold winter weather, anyway, the FitDesk has been my best friend.

In the past two months, my FitDesk has allowed me to grade a round of final research papers, finish a round of edits on my next novel, level to 100 in Warlords of Draenor, listen to two audiobooks, watch a few seasons of TV shows I wanted to catch up on, play an absolute ton of Hearthstone and other games, and still burn enough calories and stay active enough to not gain a single pound over Thanksgiving and Christmas (even without being able to run because of my hurt foot).

I don’t think I can give a higher recommendation than that.

Remember, if you decide to get a FitDesk, use the code FD30 at checkout to get your $30 discount!