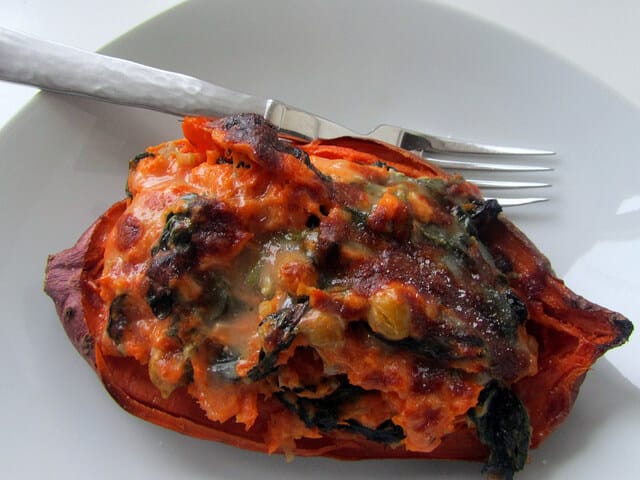 Press play to listen to this post’s companion podcast!

When I first started trying to lose weight, a great deal of my diet consisted of bread and potatoes. Since I followed the low-glycemic diet to lose weight, that meant that carbs (especially simple ones) were a very limited part of my diet.

To make things easier, I read that you could substitute sweet potatoes for white ones. The only problem was that I really didn’t like sweet potatoes. They were too ooey and gooey and sickly sweet. I hated brown sugar and cinnamon on them. And marshmallows? I was trying to lose weight here! What the heck?

So my father-in-law had my wife over for dinner one day, and he made a twice-baked sweet potato with cheddar cheese, jalapeños, and sour cream that was so good, my wife and I still eat them 3-4 times a week to this very day.

I promise you, if you want to like sweet potatoes but just can’t make yourself, try making this dish a few times.

This is the main sweet potato recipe we use because it’s really versatile and it’s super quick to make. It only takes like 10-12 minutes because we tend to use the microwave instead of the oven because it’s so much quicker. (A conventional oven takes much longer to bake and twice-bake, but feel free to use whichever you prefer.)

This is just how my wife and I get some quick, cheap meals in.

Lots of times, we end up foregoing the milk and most of the cheese, too, and just smash up some sweet potatoes, add some peppers and spices and throw whatever leftovers we have into the mix as a topping. It’s really versatile, and when people try it, they’re amazed you can do stuff with sweet potatoes to make them savory instead of overly sweet.

Have you tried savory sweet potatoes?
What are your favorite recipes for them?