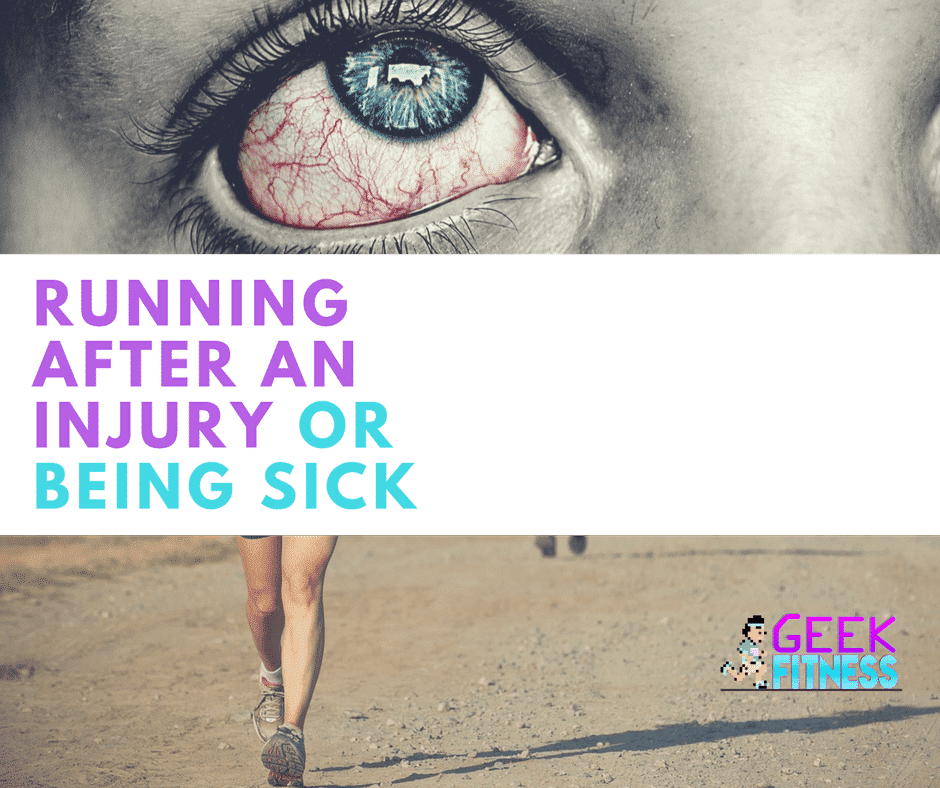 How to start running after an injury or being sick

[vc_row][vc_column][vc_single_image image=”4159″ img_size=”large”][vc_column_text]I wanted to write about this today because it’s a topic that I am currently dealing with myself. I’ve been down with the sickness (and not at all like Disturbed) for over a month now. I finished up 3 rounds of antibiotics, and I am finally beginning to feel like a human being again.

Which means it’s time to start running again after being sick.

But it’s hard. I went to the gym twice last week, and I walked the dog once. I wanted to die after each time. My body was sore, and I was so exhausted that I came back home and immediately collapsed on the couch and went to sleep. So I am kind of dreading getting back out there.

But I have to. Luckily, it’s not that hard to start over after an injury or being sick (and goodness knows I’ve been injured enough the last year and a half to know).

Where are/were you sick or hurt?

Running after being sick is hard to gauge, but a good rule of thumb I’ve found is that you can run if you have a head cold, but if it moves into your chest, then stay still and rest. For me, this was impossible because I had a sinus infection and could barely stand up because of dizziness.

If you’re just congested in your head, sure, you can run a bit and breathe through your mouth, but if it’s anything more than that, or if it’s in your chest/throat at all, then stay still and lie down. The rest will do you better than the moving.

If you’re running after an injury–like I was after my torn ankle ligament–you need to gauge to what extent you’re healed. If your doctor has cleared you to run, then my best suggestion is to feel out how much pain and weakness you feel. For instance, my ankle was so weak that I could feel it turning in some shoes, so I had to wear more stable ones, and I had to alter my gait a bit to keep that leg from hitting the ground too hard.

After a few short runs, I could wear my other running shoes and go normally down the street. Though if you do have pain at all, consider whether it’s a typical warm-up pain as your joints lubricate and your muscles loosen, or if it’s a pain that indicates your injury hasn’t healed fully.

If you are unsure, always err on the side of unhealed injury and slow your roll, okay?

You don’t want to go all-out in your first few excursions of lacing back up. You want to make sure you’re physically ready to become active again. When you’re starting to run after being sick, you won’t really be able to run.

Even runners who log 10+ miles each run won’t be able to as their bodies heal. So take it slow. Do a long warm-up walk at a brisk enough pace, then start doing slow run intervals. Don’t hit race-pace, don’t even do your normal training pace, and especially don’t push yourself into a near-max heart-rate zone.

For me, I generally use the 10% rule to start running after being sick. In fact, it’s what I am going to use today when I go out to run for the first time since the sickpocalypse.

Each interval should be no longer than 10% of your typical running distance. If you run a single mile at a time, don’t push over .1 mile. If you do a 5k, then try to keep each interval at .3 miles or lower for the first few days you’re back pounding the pavement.

This isn’t total running time, but even that should be only a third to a half of your total normal distance. You just want each recovery interval to be no more than 10% because you’re body is still in healing mode.

If it hurts too much, rest more

The main thing to remember is that getting back to running will be hard. But it shouldn’t be painful. It shouldn’t destroy you (like my forays into the gym did last week). If you find yourself not being energized, or if you get lightheaded, dizzy, your body hurts in ways you know (or even think) is an indication you’re not ready to be moving around again, rest more.

A lot of people disregard just how important rest and recovery is to overall fitness, and returning after sickness or injury is no different than taking a rest day after a hard-fought week of training. Just take it easy, start slow, and if you feel like you’re pushing yourself too hard…you probably are.[/vc_column_text][/vc_column][/vc_row]