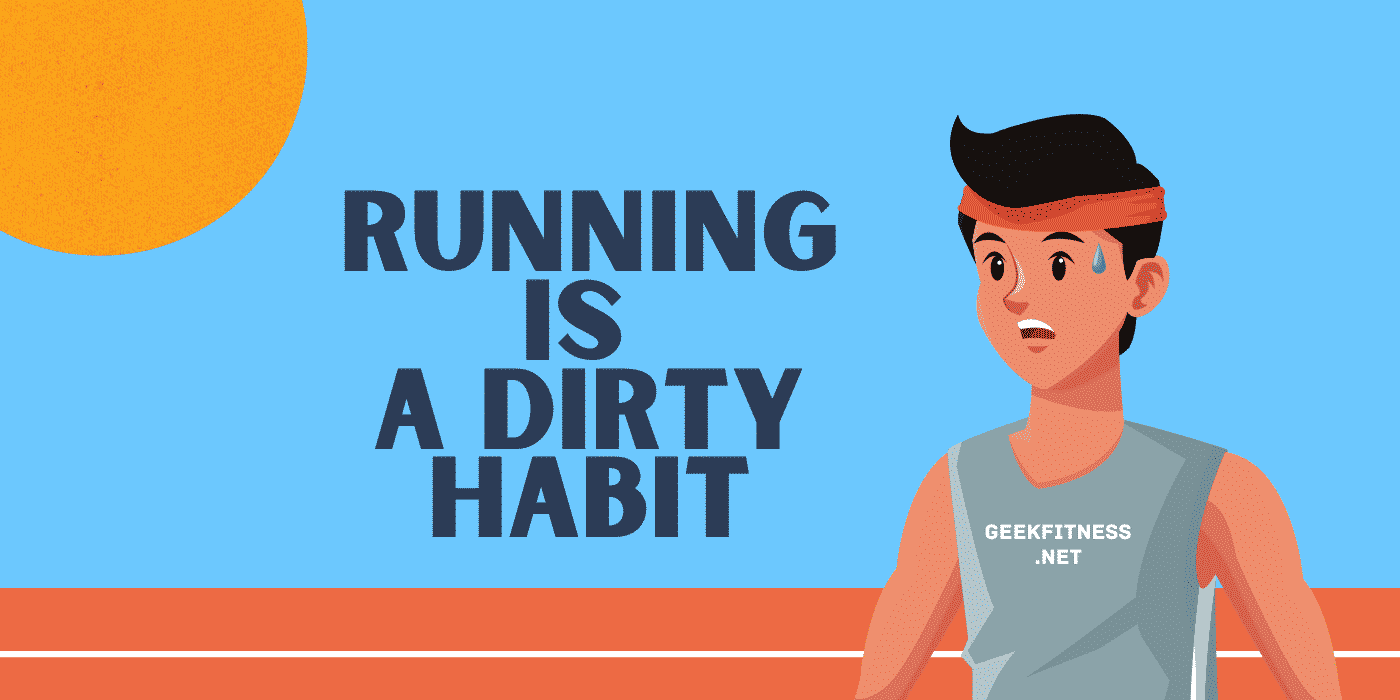 Running is a Dirty Habit

Your running habit will be a dirty, nasty, filthy (and sometimes downright funky). You will never — never! — end a run clean and spotless and pristine. Unless you’re Ridiculously Photogenic Guy (remember him?):

You’re going to love it

Running is amazing because of what a dirty habit it is. Even if you’re addicted to hand sanitizer like I am, something about becoming a runner makes you a little more tolerant of running’s inherent ickiness.

I used to be terribly averse to sweating. To being hot. Really, to being uncomfortable. I was 310 pounds, and I flat-out refused to be the fat guy who was huffing and puffing and sweating through his clothes. So even in summer I wore layers, I avoided most physical activity and being outdoors in the heat as much as possible.

I couldn’t stand to fall into that stereotype. But as I began running, I had to push myself through that discomfort. I hated being sweaty so much that learning to run and allow myself to be that was sort of like exposure therapy.

In the end, I now relish being sweaty and hot. I love the feeling of salt caked on my face and seeing the streaks down my cheeks. And all that grit and grime collected just above my socks? A badge of honor.

Regardless, my being hot and sweaty and gross is a good indication that I worked my body the right way. It’s not just me, either!

Other people love being gross, too!

Just look at the popularity of color runs and mud runs. People flock to these sorts of events and finish looking like real-life anime characters or slasher-movie extras, all covered in goo. Not only that, the post-run photos always depict the runners disgustingly happy and peppy despite being disgustingly in need of a bath.

If you’re looking to start running, you need to keep in mind how dirty of a habit it really is. And by dirty, I really mean awesome.

Like I said before, the idea of that used to disgust me. I still hate being dirty, hate feeling sticky. But not when I’m running. That’s when I want to be that way. But if I’m sticky and wet outside of that? I freak out a little.

If you want to be a runner, you have to overcome that. As I said, it’s kind of exposure therapy because a big part of being a runner is sweating from places you never thought you’d sweat from.

At this point in my running career, if I don’t end up with a nice, salty sheen, I don’t feel like I did anything of note. If I don’t huff, puff, and drip when I’m done with a run, I don’t feel like it was a successful session. That maybe I didn’t work as hard as I could have. (Which isn’t the case at all, by the way.)

One day, you’ll feel the same way. And when that day comes, you’re going to love it.

Even if you don’t quite appreciate it at first.

Because of how much you’re going to sweat and just how drenched you’re likely to be on any given day, you are going to be…ripe. Yeah, ripe. That’s the nice way of putting it.

After most runs, you’re going to be surrounded by a cloud of muck and stink that makes a non-runner go out of their way to avoid being anywhere near you.

Why do I say a non-runner? Because runners get used to the smell. It’s not quite body odor, but it’s the odor of your body. It’s the smell of a good burn. It’s the stench of doing something worthwhile for your body. And eventually, you won’t even notice it anymore.

My wife and I used to make jokes about us being the stinky twins after we ran. We’d go home, immediately shed our workout clothes, toss them in the wash, and then hit the showers. We couldn’t stand to be so stinky, even if it was just around each other.

Now, though, that’s all changed. I don’t even notice the smell anymore, and I doubt she does, either. We still stink, no doubt. But…we don’t mind it as much.

As you move into your career as a runner, you probably won’t notice it for very long, either. Much like the amount of sweat you’ll have pouring off your body, the smell just kinds of becomes…ordinary.

Now, whether that’s a good thing, I don’t know.

Veruca Salt was right: Spitting is a dirty habit. Thing is, if you’re a runner, you have to spit. You just have to. You’re drinking constantly, and you’re panting and breathing, and sometimes…it’s just too much.

Because of some nasal issues, my head is consistently congested. I run with a lot of drainage, and the excess mucus has to go somewhere that ain’t my belly. So I spit. A lot.

The important thing to remember is that because you’re going to spit a lot, you have to make sure you’re not doing it around other people. Spitting isn’t the worst thing you can do. Spitting on another runner might be pretty close, though.

And if spitting is a dirty habit, I don’t even know how to classify a runner’s need for a perfect snot rocket. I mean, seriously, any activity where there are specialized videos on how to properly blow your nose without hitting people with the projectile is an activity after my own heart.

Like I said before, I get congested really easily. On top of that, I have exercise-induced asthma, so before most runs, I take a couple of puffs of my Albuterol inhaler. The medication tends to loosen a lot of stuff in my head and chest, and I’m sniffling and snot-rocketing the entire distance of my runs.

Even if you don’t have medication affecting you, you’re going to be snotty. Outside of running form, proper breathing technique is an important part of running, so the clearer you keep your airways the better.

During cold weather runs, you’re likely to have long sleeves on. Don’t feel bad about wiping your nose a sleeve or even using it as a makeshift hanky. And during hot weather? That’s what the bottom of your shirt is for!

Sure it’s nasty, but we’ve already established that you’re going to be soaked in sweat and bodily fluids anyway. Just make sure you don’t shake anyone’s hands after the run unless you push up your sleeves first.

Runners are dirty and stinky and wet and gross. But we’re also healthy and lean and strong and resilient. We know the value of hard work and how to push through the nastiness and discomfort. And we can see the good that can and will come despite — and maybe because of — all that grossness.

So yeah, running is a dirty habit. And I wouldn’t have it any other way.