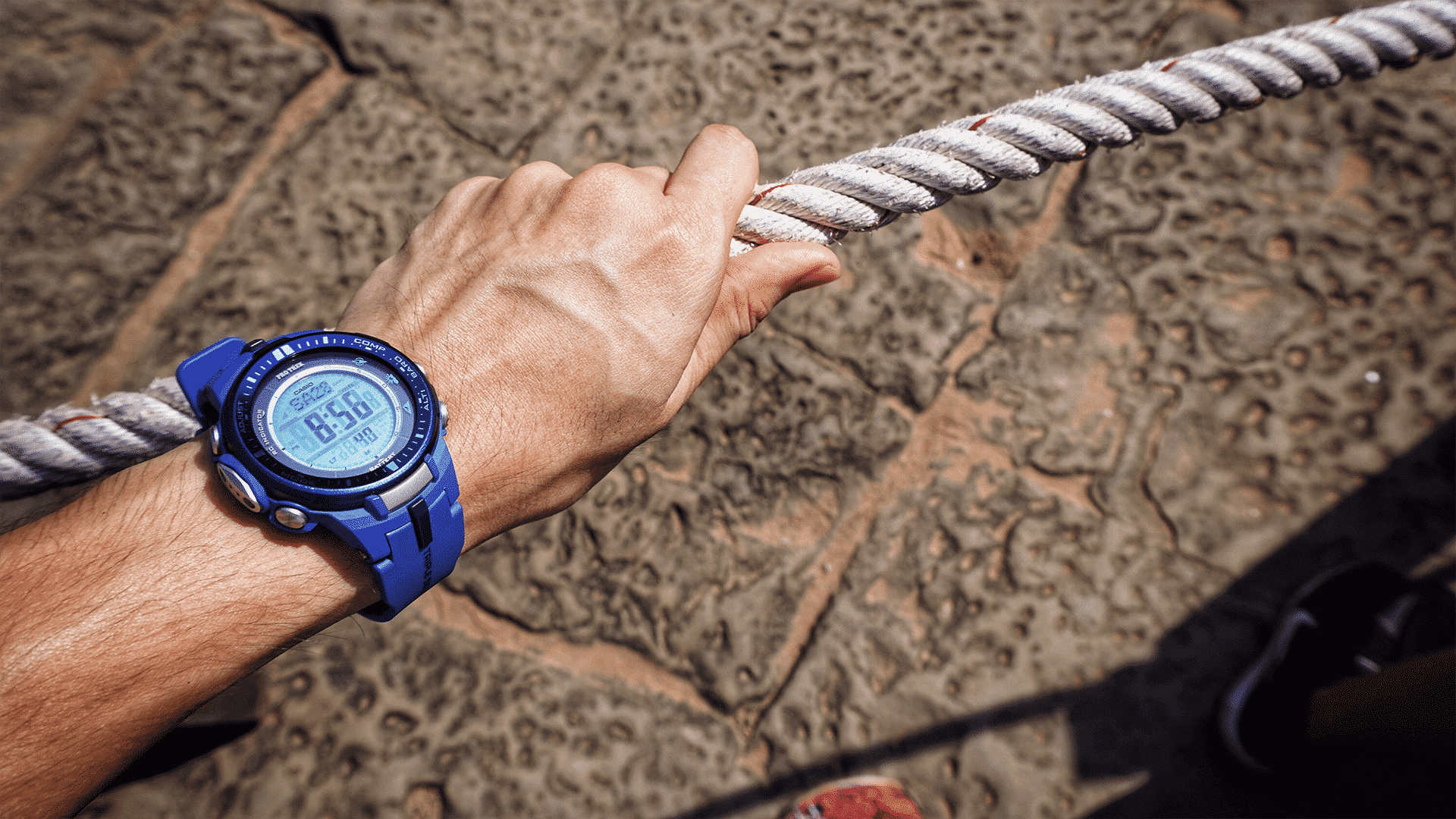 Do You Need a GPS Watch to Run?

Update: Over the past year, I’ve started running with the Garmin Forerunner 235. To say it’s one of the best purchases I’ve ever made for my running is an understatement. The heart rate monitoring is totally accurate, and amazingly so is the treadmill accelerometer tracking. That part is awesome. I can’t recommend this watch enough. Combine all that with it allowing smart notifications (for texts, calls, Tweets, Slack, whatever) and build-in activity tracking using the Garmin Vivofit tech, I’m kind of in love. You can grab one here:

If you’ve ever been to a race, gone running, or even seen a runner somewhere, you have probably also seen nearly everyone starting at their wrists as they plod along. At some point, you have to ask yourself, “Do I need a GPS watch to run?”

Absolutely not. You don’t need a GPS watch to run. All you need is a comfortable pair of shoes and the desire to put one foot in front of the other.

The ubiquity of GPS watches is impossible to miss. In fact, if you don’t run with GPS these days, I’d say you’re definitely in the minority.

But should you have one anyway? Well, that depends on why you’re running.

Why Are You Running?

If you’re running just to run, then no. You don’t need GPS of any kind. If you’re the kind of explorational zen runner who doesn’t feel the need to keep up with your time or distance, then why in the world would you strap a tracking device to your body?

Just run. All GPS will do is make you crazy.

If, however, you’re like me and already crazy, then you will probably want some kind of GPS. I mean, if you go gaga over numbers and data and metrics and all that shiny stuff, having a GPS tracker really helps out.

Take me for instance: I like to know how fast I’m going. I use that to know if I need to speed up or slow down (because I have a set time and pace goal in mind). I like to know what distance I’m at. Seeing that I have another 3 miles to go motivates me because I know I’ve already run 10.1, and I’m still feeling fresh.

Data and numbers mean something to me in terms of fitness. Even though running is what keeps me sane and alive, I like to look back over my training data and see what I did well–and what I can do better.

The State of Running with GPS Watches

GPS devices are pretty ubiquitous these days. The honest truth is that no, you don’t need a GPS watch if you’ve got a smart phone.

Pretty much every cell phone you can buy these days has the ability to download Runkeeper, MapMyRun, Runtastic, Endomondo, Nike+, or some other GPS app to keep up with yourself.

Outside of a few quality-of-life features that differentiate all the apps from each other, they all do the same thing–they use your phone’s built in GPS to track your movement.

For a while there, phone GPS was terrible inaccurate. You see, GPS watches directly connect to the GPS satellites in space. The only inaccuracy you get comes from the latency between your watch and outer space (which is why “current pace” recordings can vary so wildly from second to second.)

Phone GPS, however, is relayed over the cellular bands. You aren’t directly connected to anything. Your phone is reporting your location to the satellites through the relay towers that route the wireless signal and then triangulating your position, adding in a little extra time between determining exactly where you are.

Generally, GPS watch accuracy is about +/- 3 feet, while smartphone GPS app accuracy has been +/- 6.

As technology gets better, however, phone GPS is getting faster and more accurate, though. These days, when I’ve compared numbers with people at the ends of races, my app, their watch, and the race distance itself is all within about .1/mile of each other.

So don’t let the idea of “inaccurate” runs keep you from using your phone. And honestly, unless you’re an elite athlete, the margin of error between phone and GPS watch is so small you’re not going to notice it during your race training.

Obviously, if there weren’t benefits to GPS tracking, then nearly every runner out there wouldn’t be a member of the Eccentric Wrist Starer’s Society.

The question is, just what are the benefits to tracking your runs by GPS?

Well, the most obvious benefit is that you know pretty much exactly how your training is going. From the distance you traveled, how fast you ran it, and how many calories you burned, GPS tracking gives you the information to understand your current fitness level.

Which is really important when you’re training for a race.

And that means that come race day, there won’t be as many surprises because you already know precisely how long and how fast it will take you to run that 5K. That may not sound like much, but believe me, come race day, you will want to minimize the number of surprises that come your way.

Probably the most beneficial aspect of GPS tracking, though, is the increased accuracy in knowing how many calories you burned while out on your run.

Almost every app, every watch, and every service you sign up for will ask you for your height, weight, and body type. They will then use those metrics to give you a pretty decent readout of how many calories your body is burning while on the run.

Now, running is an amazing way to lose weight and keep it off. I’m proof of that. Just keep in mind that it’s very easy to overeat while training–because you feel like you’re working way harder than you really are. It happens to us all. We have a great 3-mile run, and we celebrate by eating a delicious burger and fries.

You may feel like you’ve burned the nearly 1,000 calories in that burger and fries, but unfortunately, that run probably only burned ~300 calories. See the issue?

GPS tracking lets you get a better idea of your calorie burn, especially when combined with a heart-rate monitor (which is honestly the most accurate way of determining calorie burn).

So basically, if you’re going to use a GPS watch or app to track your running, the benefits basically boil down to more efficient training. If that’s what you’re looking for, then you should definitely get a GPS watch or smartphone app.

The big difference in my experience is how you keep up with yourself. I use Runkeeper to track myself outside. I love it. I’ve used it for the past three years, and I fully intend to use it to train for a marathon this year.

Not to mention that my phone was going to be with me anyway because of the awesome music and podcasts/audiobooks I listened to while I ran.

The first year I used Runkeeper, I had it set to give me audio cues every half a mile. It would dim my music and then tell me my total time, distance, and average pace at every half-mile interval. It was all I needed.

The next year, however, I decided that I really wanted to keep a more accurate check on my running. I looked up various GPS watches, but I had a coupon for a Pebble Smartwatch, so that’s the one I went with.

The Pebble isn’t a GPS watch, technically. It does, however, connect to my phone over bluetooth and integrate natively with Runkeeper. Score!

It tells me my time, distance, and average pace right on my wrist (you can see it in the header image at the top of this post, btw). It was cheaper than a traditional GPS watch and since I was going to have my phone with me anyway, it was the natural choice for me.

Training with my time on my wrist was incredibly freeing. I hadn’t realized how terrible the Runkeeper audio cues were until I was running without them. Turns out, the Siri-like voice announcing my pace and time and distance and all that really harshed my running mellow.

Being able to glance down at my wrist whenever I needed to check was much, much nicer. It actually improved my training.

My wife runs with a few audio cues, she says, but mostly ignores them and looks at the screen of her phone whenever she needs to check something. When I tried that, I fumbled with my phone and the sweat on my hands wouldn’t let the screen respond. So the wrist-based tracking is much better for me.

So Do You Need a GPS Watch to Run? Should you run with GPS?

No. Absolutely not. I’m training for a marathon this year, and I still don’t have a dedicated run-tracking device. My wife has been running for years, and she doesn’t have anything on her wrist, and she even forgets to turn on Runkeeper sometimes.

Now, if you’re a runner who doesn’t listen to headphones while you run, and you still want to track, yeah, you’ll probably want to snag a GPS watch instead of just using your phone. The convenience of keeping the info on your wrist and not have to deal with risking your cell phone on a trail or the road is worth it.

I do personally like the wrist-based information. I like being able to glance down, see my stats, and continue running. It’s motivating to me to see that I’m maintaining–or beating–my goal pace. I like to see how far I’ve run.

If you’ve never tracked your run with GPS before, I say grab an app first and see if you like it. Give it a few months or a training cycle for a race to see if you’re a data fiend like I am. If you like it, do your research and see if a smartwatch or a GPS watch will work for what you want.

But do I need a GPS watch? With the plethora of free GPS apps out there, you really do not need a dedicated GPS watch. I don’t need my Pebble. It’s nice, and running without it isn’t the end of the world. Same goes for Runkeeper and GPS in general.

At any given time, I can just lace up and head out the door.

That’s really the beauty of the sport.

What are your thoughts on GPS Watches vs. Running Apps?